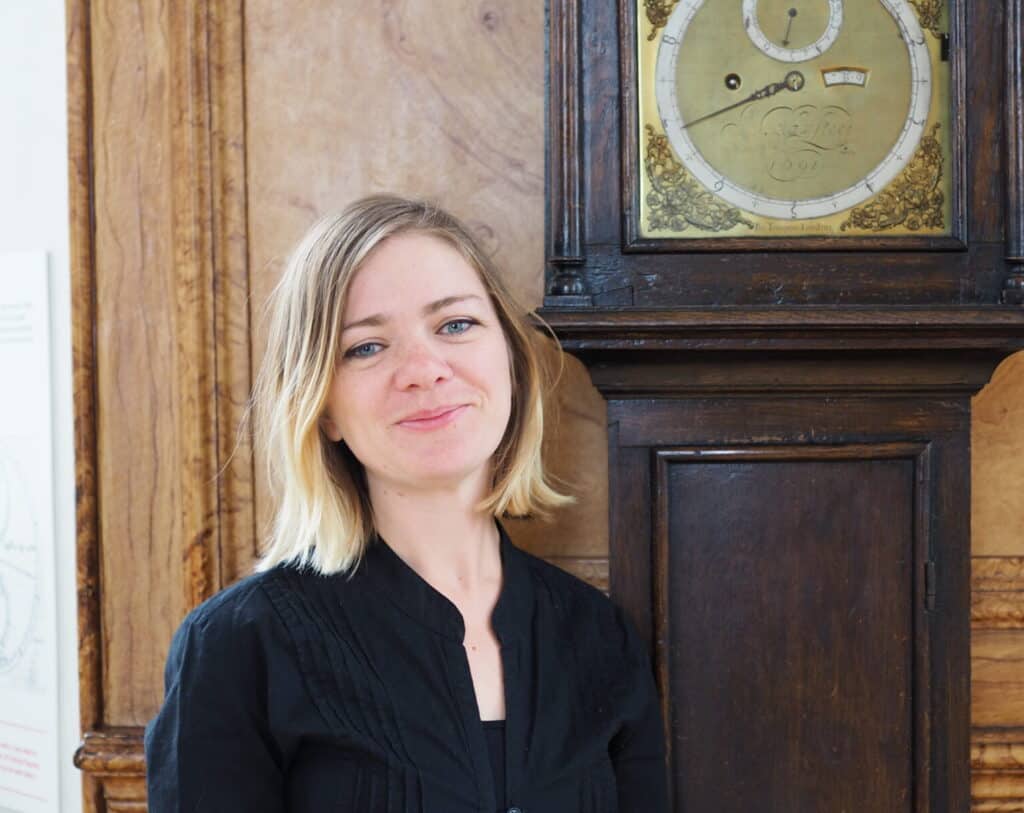 A Day In The Life…Anna Rolls, Curator, The Clockmakers’ Museum

Anna Rolls is the Curator of the Clockmakers’ Museum, the world’s oldest clock and watch collection, at the Science Museum in London.

Assembled by the Worshipful Company of Clockmakers, the collection includes more than 600 watches, 90 clocks, 30 marine chronometers and a number of fine sundials and examples of hand engraving, mapping the history of innovation in watch and clock making in London from 1600 to the present day.

MWM: Where does your interest in watches originate from?

AR: My journey into the world of clocks and watches started a bit later than for many, but my interest keeps developing the more I learn about the subject. I guess it originates with my interest in scientific instruments, and that stems back to my Father, who as a medical historian collected a whole range of instruments which were dotted around the house. I was always fascinated by how these things could be so beautifully made, and yet purely functional, often for fairly gruesome jobs!

I chose a work route relating to craft and then conservation, and was fortunate to end up working with the scientific instruments at Greenwich. When I eventually started working with the horological collections I realised that this was a subject which combined all the areas I like. They are practical and instruments of science, but they can also be decorative and beautiful like furniture or jewellery. Delving into their history, they can tell stories about the development of the human race, from our need to improve timekeeping for the purposes of communication or navigation, to their role as luxury goods and trading commodities.

MWM: Can you tell us what are the primary aspects of your role being the Curator of the Clockmakers’ Museum

AR: In many ways I am the first ‘port of call’ for anything to do with the museum and archive, which means my role encompasses many different aspects of museum work. This includes public engagement such as giving tours and lectures, answering enquiries, as well as cataloguing and updating interpretation of the collection both in the gallery or via collections online. I also deal with collections management, which includes dealing with new acquisitions and loans, organising the conservation of the collection or keeping collections documentation up to date.

MWM: Typically, what does your working day involve?

AR: This is a tricky one to answer as it varies so much! I am predominantly based in front of a computer dealing with email enquiries and whatever projects I am currently involved with, but of course if I need to organise anything related to the collection then I will be onsite in the gallery or store to sort out or oversee the work.

AR: I have just finished writing a piece about one of our new acquisitions; a menu covered in the autographs from a dinner put on by Smiths in recognition of the British Everest Expedition, plus accompanying photo. It was at this dinner that Edmund Hillary handed over the watch he wore on top of Everest, to the Worshipful Company of Clockmakers for permanent display in their museum. Other than the day-to-day curatorial, gallery and collections management work, I will soon be starting the second phase of a photography project to produce some images of our collection, which will then be available to the public via the Science Museum’s collections online site. I am also working on a project to make some changes to one end of the gallery in the next year. I can’t say too much about it as it has not yet had final agreement to go ahead, but if we are successful we hope to showcase some amazing horological objects from beyond our collection.

MWM: In your opinion, which period of English Watch and Clock making is the best time and why?

AR: I know that it is so easy to talk about the ‘Golden Age’ of English horology, but if you take a visit to the Clockmakers’ Museum then I think it becomes apparent fairly quickly that the clocks and watches produced around the last quarter of the 17th century and right through the 18th century were from a great period of English horology. Scientific experiment was happening all around London, with the City’s clock and watchmakers also contributing to the development of more accurate timekeeping. Not only that, the style and design of these pieces was of the highest quality, and it is no wonder that they were exported around the world. I also like that this was an evolutionary period, which saw not just a development of escapements and improvements like the introduction of jewelling, but also it was a time where the design of watches in particular, was evolving and changing as new technologies and techniques were being developed.

MWM: If you had to choose a particular favourite watch and clock in the collection, which would they be?

AR: This is another very difficult question to answer! My interest in things always evolves as I learn more about the subject, which makes choosing a favourite particularly hard, as there are many I would like to talk about!  If I could (legitimately) take something home with me I’d probably choose the watch from c.1625 by John Ramsay (below). It has lovely cloisonné enamel dial and a case made from three pieces of carved rock crystal. It still retains its protective outer box, which is very rare to see. Why do I like it? In this instance it is the materials and beauty of the watch which win me over, rather than its timekeeping! The use of rock crystal as a case material predates the use of glass, giving protection to the movement whilst allowing the user to see the watch inside. The body is carved from one piece so that you can see the train of wheels within. The lids are faceted, making the whole watch sparkle when it is moved. The enamel, although a simple design, has a brilliance and translucency to it.

As for a clock, I think on this particular occasion I might choose the clock by Samuel Watson (below), which legend has it belonged to Sir Isaac Newton. Forgetting the claim of ownership, which may or may not be true, Watson importantly was the first clockmaker to make a clock showing the motions of the celestial bodies in at least 300 years, which is still on display in the library of Windsor Castle. Our clock is interesting, because it is one of two very similar astronomical clocks by Watson (the other one is in the Science Museum’s collection). Similar, but fundamentally different, because ours has a dial which is based on planetary motion as taught by Ptolemy- that is, where the Earth was static and at the centre of the universe. The Science Museum’s on the other hand, has a heliocentric dial. The heliocentric model, where the Earth revolves around the sun along with all the other planets, was first published by Copernicus in 1543, after whom it is named. However, his maths wasn’t quite right, and it would take another 150 years or so, with the work of great astronomers like Galileo, Kepler and Newton, to convince the world that we weren’t at the centre of the universe, but instead hurtling through space! Newton’s Principia, published in 1686 was the final nail in the coffin for the Ptolemaic model, and these clocks, whether they belonged to the astronomer or not, represent that massive shift in scientific thinking at that time.

MWM: Why should people visit the Clockmakers’ Museum?

AR: The collection is like a treasure trove, and whether you know about the subject of horology or not, you can’t help but be impressed by the sheer beauty and wealth of the collection. It features some amazing examples by some of the greatest names in English horology, and also gives the visitor the opportunity to learn a bit more about the Worshipful Company of Clockmakers, who are so ingrained with the story of the clockmaking in London, and who started the museum collection in 1814.

Anna Rolls is a Friend of MrWatchMaster