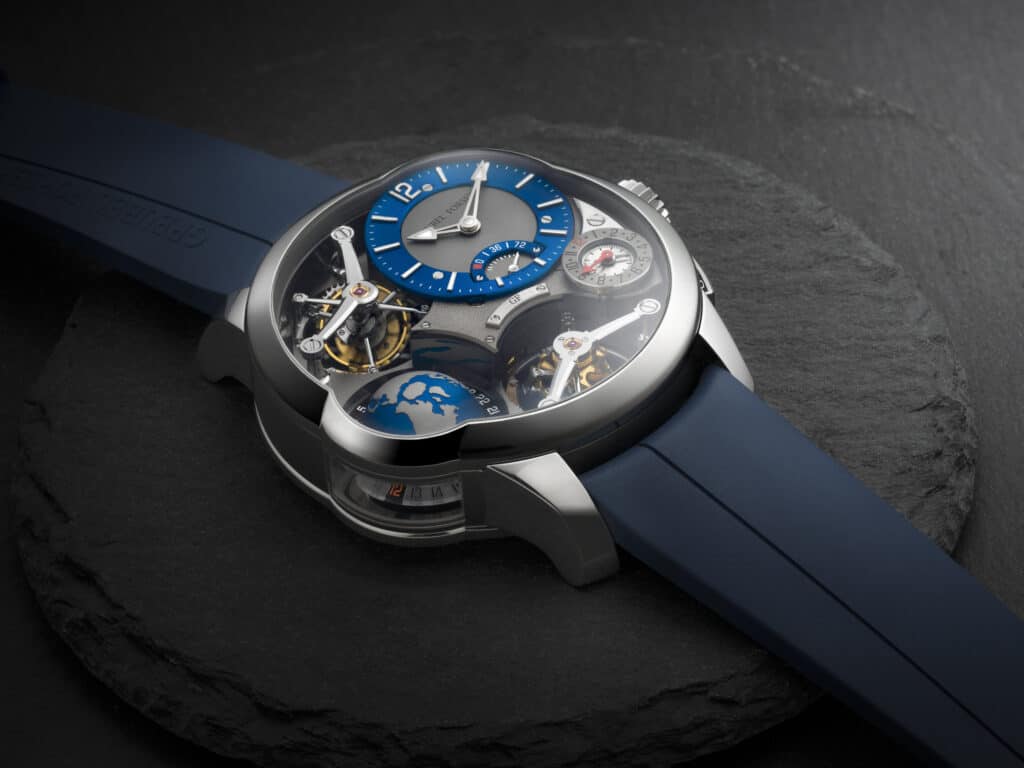 Greubel Forsey creates the next chapter for the GMT Quadruple Tourbillon with an 11-piece edition of this groundbreaking timepiece in Titanium with striking blue accents.

To achieve this, the original tourbillon has been elevated to realise its full potential: inclined at 30°, doubled and then quadrupled. The result, two synchronised Double Tourbillon 30° mechanisms, where a first cage, inclined at 30° and rotating in one minute, is nested within a second horizontal cage, completing a full rotation in four minutes.

With this exclusive limited edition in titanium with striking blue accents, Greubel Forsey offers an unexpected alternative to the precious metals that High-end watchmaking traditionally favours. Titanium has numerous qualities: it is both stronger and lighter than steel, while also being extremely resistant to corrosion and magnetic fields.

The circular-grained hour ring with polished bevels and 72-hour chronometric power reserve indication appear for the first time in a brilliant blue. The mainplate is now frosted and spotted with polished bevelling, countersinks and straight-grained flanks, executed in a grey finish.

Planet Earth, set near eight o’clock, shines in a new light with the blue livery. An original Greubel Forsey creation from ten years ago (2011), the rotating terrestrial globe allows for the simultaneous display of several different time zones: on the dial side, with a 24-hour ring around the Earth, for Day/Night indication and on the caseback side, displaying 24 major cities their respective time zones while distinguishing between those which use summer time (on a light coloured backdrop), and those which do not (on a dark backdrop).