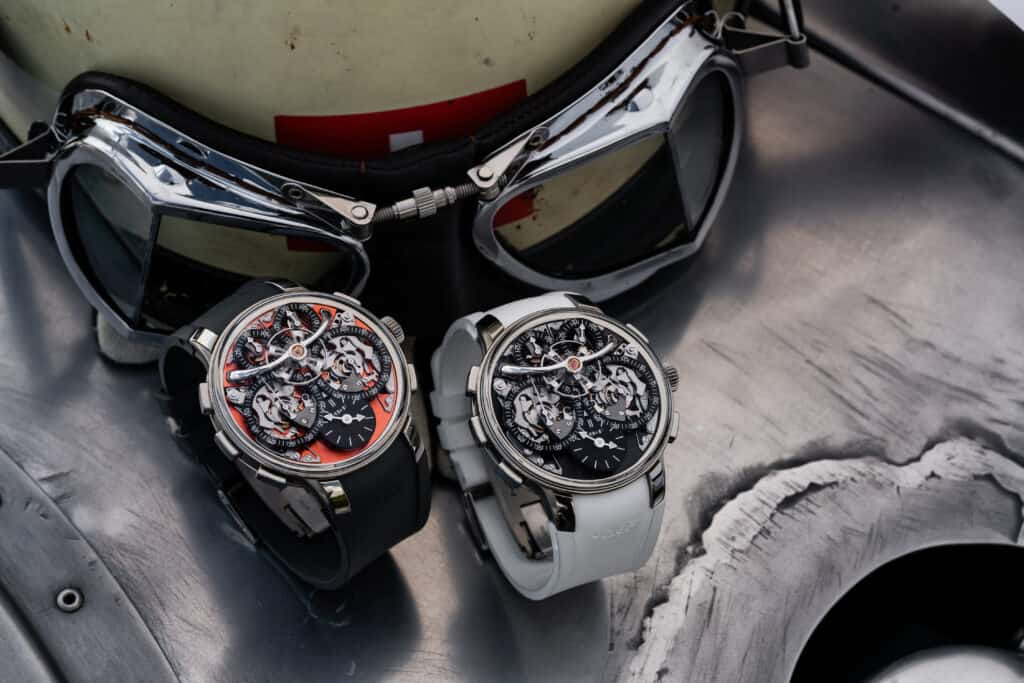 There is a fifth pusher, located at the 9 o’clock position: the “Twinverter”. This pusher is the secret that elevates the functionality of the LM Sequential EVO beyond any existing chronograph wristwatch. It controls both chronograph systems, operating as a binary switch that inverts the current start/stop status of each chronograph. This means that if both chronograph displays happen to be stopped (at zero position or otherwise), pressing the Twinverter will cause both of them to start simultaneously. If they are both running, the Twinverter makes them stop. If one is running and the other is stopped, the Twinverter stops the one that is running and starts the one that is stopped.

Simultaneous mode is used for example in a race involving two competitors, starting simultaneously. The Twinverter allows to start both chronographs at exactly the same time, but the different end points can be easily recorded by pressing each chronograph’s individual start/stop pusher. To note, the durations of the events can exceed 60 seconds, which is the limit for the vast majority of split-second chronographs on the market.

Cumulative mode occurs frequently in the work environment, where you might want to know how much time you spend on two separate projects as you switch between them throughout the day. By starting one chronograph when you begin working on one task, and then using the Twinverter when you shift focus to the second task (switching again when you go back to the first), you can easily track the amount of time you cumulatively spend on each task. Another example of this usage is the timing of a chess match.

Sequential mode (or lap mode) has its greatest relevance in competitive sports, where it can be used to measure individual lap times. Starting one chronograph at the beginning of an event and using the Twinverter upon the completion of a lap instantly launches the second chronograph in order to time the next lap, while the first chronograph is stopped, allowing ample time for the timing result to be noted down. The stopped chronograph can then be reset to zero, ready to be relaunched with the Twinverter for the following lap. Thanks to its minutes totalisers, LM Sequential EVO can be used effectively in sporting events with average lap times of over a minute (which includes the vast majority of lap-racing sports).

Independent mode can be used for instance in the preparation of a meal, where different things need to be cooked for different periods of time, at different points in time. You would operate the two chronograph mechanisms via their respective pushers — for instance, starting one when you put your pasta into boiling water and starting the other when the vegetables go in the oven. In fact, this application of LM Sequential EVO comes in handy in all areas of personal productivity. At the gym, for example, when trying to optimise your physical workout routine, one chronograph can be set to time your entire session whilst the second is used to record your time at each station, or the downtime in between.

Legacy Machine Perpetual EVO was launched in 2020, introducing the EVO collection into the world of MB&F. Based on the established codes of the Legacy Machine collection, EVO placed wearability, robustness and versatility at the core of its identity.

Galvanic black dials with Super-LumiNova on numerals and hands.

Left chronograph : seconds displayed at 9 o’clock and minutes at 11 o’clock; start/stop pusher at 10 o’clock and reset at 8 o’clock.

Right chronograph : seconds displayed at 3 o’clock and minutes at 1 o’clock; start/stop pusher at 2 o’clock and reset at 4 o’clock.

Twinverter pusher at 9 o’clock: binary switch that inverts the current start/stop status of both chronographs.

Power reserve indication at the back of the movement.

Sapphire crystals on top and display back treated with anti-reflective coating on both faces.