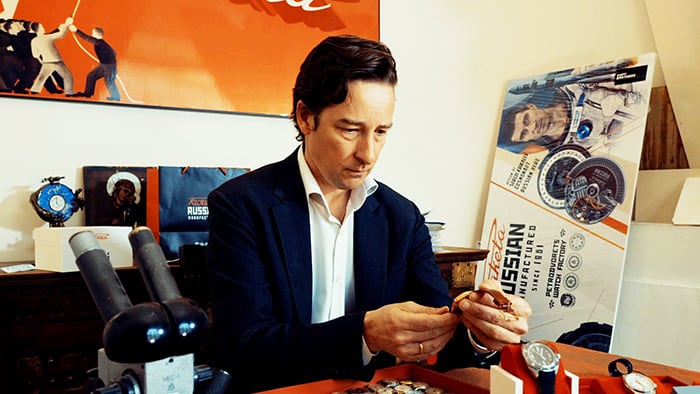 Next we meet David Henderson-Stewart, CEO of Raketa Watches, the Russian mechanical watch manufacture based in Saint-Petersburg. It was established in 1961 in honour of the first cosmonaut, Yuri Gagarin.

Raketa is one of the few brands in the world whose mechanical parts are all produced within its own factory, including the spring which is one of the most difficult parts to make. They even have their own Choir! (see video below)

David has lived in Russia for over 15-years and had no previous experience in watchmaking, when he took over the Raketa business. We are delighted to bring you his fascinating thoughts about the business and their future exciting releases planned for the coming year.

DH-S: None of Raketa’s watchmakers really consider the Raketa Watch Factory as a ‘business’. To us it is a priceless national heritage that we saved from destruction after the fall of communism, thus indirectly saving Russian watchmaking. This first mission being accomplished, we must now show the world that Russian watches are extremely interesting and contribute, like British watchmaking, to making the world of watchmaking more diverse. How sad it would be if there were only Swiss watches! I am happy to say that more and more people around the world are beginning to appreciate our watches with great interest, which is why we had a significant sales’ growth in 2020.

DH-S: We are currently working on an exciting new limited edition of Raketa’s existing ‘Avant-Garde’ model. This famous Raketa watch celebrates Russia’s avant-garde art and pioneers a new way in showing the time: its unusual hands are in the form of round and triangular shapes floating around the dial. Why should the design of hands always follow the same conventional boring pattern? This new limited edition will have an even bolder ‘avant-garde’ design that will extend to the automatic movement and to the strap of the watch – launching in March this year.

MWM: Tell us something we don’t know about Raketa watches?

DH-S: Every Raketa watch has an automatic movement 100% produced in Raketa’s own factory in Saint-Petersburg. Even the escapement – the very heart and most complicated part of the movement – is produced in-house by Raketa! Raketa’s mechanical movement is very Russian by its engineering design and also materials. Even the ruby stones and the metals used in the movement come from Russia: for example, Raketa’s hair-spring is made from a secret Soviet alloy (we keep the alloy’s formula very well guarded, a bit like Coca-Cola’s recipe!). According to Swiss specialists, all of the above gives the Raketa movement a very distinct sound that is quite different from that of Swiss movements: you can discover this sound below!

DH-S: I am wearing today the Raketa ‘Russian Code’ model (below). This is a very curious and unusual watch where time moves in harmony with the natural counterclockwise movement of our planets around the sun. All the planets turn counterclockwise (you can check this in Wikipedia) around the sun! A special Raketa automatic movement makes all the hands move in a reverse direction around the dial! Who said that the conventional clockwise direction is necessarily the correct one?

MWM: Apart from your own brands, which watch would you like to own?

DH-S: I am very interested in British watch brands such as Bremont for example. Not just because I am British, but also because, they are not afraid to follow their own path which stands out from the mainstream path of Swiss brands. I admire the way they are trying to revive British watchmaking and the way they are proud of their British values and style.

DH-S: There isn’t really anything that I don’t like. There are things that I find difficult, such as managing a manufacture producing 100% of its own mechanical movements. This is totally crazy from an economic point of view! There is a good reason only a very few other watch brands have their own manufacture: it’s just incredibly complicated and expensive! Making a mechanical movement is nearly as difficult as making a space rocket (which is also why so few countries can build space rockets!). But the efforts invested in our Raketa factory have really been worthwhile: our Manufacture is the soul of Raketa and is the reason why Raketa watches are truly Russian made.

DH-S: Our next horizon is to increase our distribution outside Russia. We try to make the best possible manufactured Russian watches that are true to Raketa’s values and we are very confident that they will be interesting to an increasing number of people outside Russia.