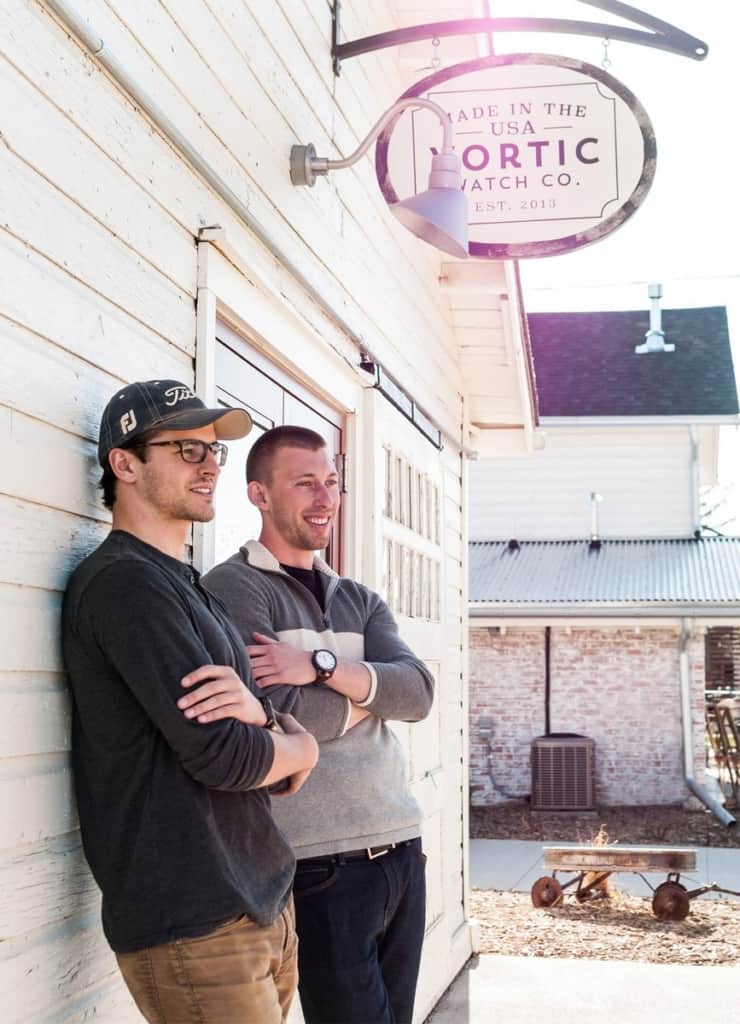 Next we meet R.T. Custer and Tyler Wolfe of The Vortic Watch Company, a high-end wristwatch engineering and manufacturing company whose inspiration lies in pairing classic watchmaking techniques and traditions with innovative, modern technology.

Both R.T. and Tyler have always had a great passion for timepieces and recognised that many antique pocket watch movements had become ‘orphaned’ from their original precious metal cases. They found vigour in restoring and preserving the beautiful pieces in a functional way adding cutting-edge 3D technology to encase the movements, allowing them to be worn on the wrist – the rest as they say is history.

Following their recent tumultuous successful legal battle with the mighty Swatch Group, we are delighted to bring you their views on current business and their plans for the future.

RT: We’re on target to have our best year ever. We love the outpouring of support from our customers given the difficult year and all the challenges.

TW: It’s certainly been an interesting year, but it’s been full steam ahead for us. Sales are strong so we’re investing in new machines and technology which is a lot of fun.

TW: For me, the list seems to get longer rather than shorter. We’ve got a bunch of new products in the pipeline, but right now we’re finishing up the Military Edition parts production. It’s actually been a little frustrating with how demanding regular production has been this year, and I’m looking forward to getting back to R&D on a new product line coming out later this year or early next year.

MWM: Tell us something we don’t know about Vortic Watch Company?

RT: We’re not a watch company. We’re an engineering and manufacturing company that just happens to focus on watches.

TW: Everything that we do seems to be more difficult given the abnormal nature of our watches. As a result, each and every part of each watch is very personal to our watchmakers, and we really care about every single piece.

RT: Our first prototype of the First Edition of our Military Edition. It’s very special to me as it’s been a project we dreamed of for a very long time and when it finally came into existence, it was even better than I could possible imagine. I’ll never take it off.

TW: I wear the first watch that was machined in-house here at Vortic. It’s got some quirks because it’s a prototype, but it reminds me of how far we’ve come.

MWM: Apart from your own brand, which watch would you like to own?

RT: I really want one of the high end G-Shock watches. I think they have a titanium model they make in limited editions. It’d be a tool watch for me while doing fun things like golfing and rock climbing.

TW: I don’t think I can choose one but it’d be Nomos, Damasko, Weiss, and RGM not necessarily in that order! I respect the independent spirit and style of those guys and aspire to some of their competencies.

RT: The best thing about what we do is that we make something that you don’t need. A watch is a luxury purchase typically bought for celebrations and happy moments in life. We get to share in those moments with the customers, and since we’re not a service business, there’s almost never any urgency, so we can take our time and do everything perfectly.

TW: The watch business gives us the opportunity to be perfectionists. We never have to ask ourselves if something is worth it. If it’s better, then that’s what we do. Making something that’s technically accurate with aesthetic perfection is a great challenge.

RT: It’s something I don’t like about the luxury industry. Marketing and advertising is extremely expensive and little companies like ours struggle to get our name out there. We have tons of customers say, “how have I never heard about you?!” That’s because we simply can’t compete against the big company ‘ad-dollars’.

TW: We have to be perfectionists. We can never say, “oh, that’s fine,” and move on. We have to take everything all the way – and that can make progress difficult at times.

RT: Next year, we’re set to launch a 2nd brand called Custer & Wolfe, named after myself and Tyler. It’ll be a sister company to Vortic and we’ll try to produce a larger quantity of watches at a new and lower price point, so we can reach a much larger audience of customers. We’re also going to start a ‘non-profit’ to help train new watchmakers and machinists. This will be our attempt at solving America’s ‘skill trade gap’.

TW: RT pretty much covered it! Breaking into the ‘modern’ watch industry and creating a training program to teach watchmakers and machinists for ourselves as well as the industry will be very fulfilling.

Both RT and Tyler are Friends of MrWatchMaster