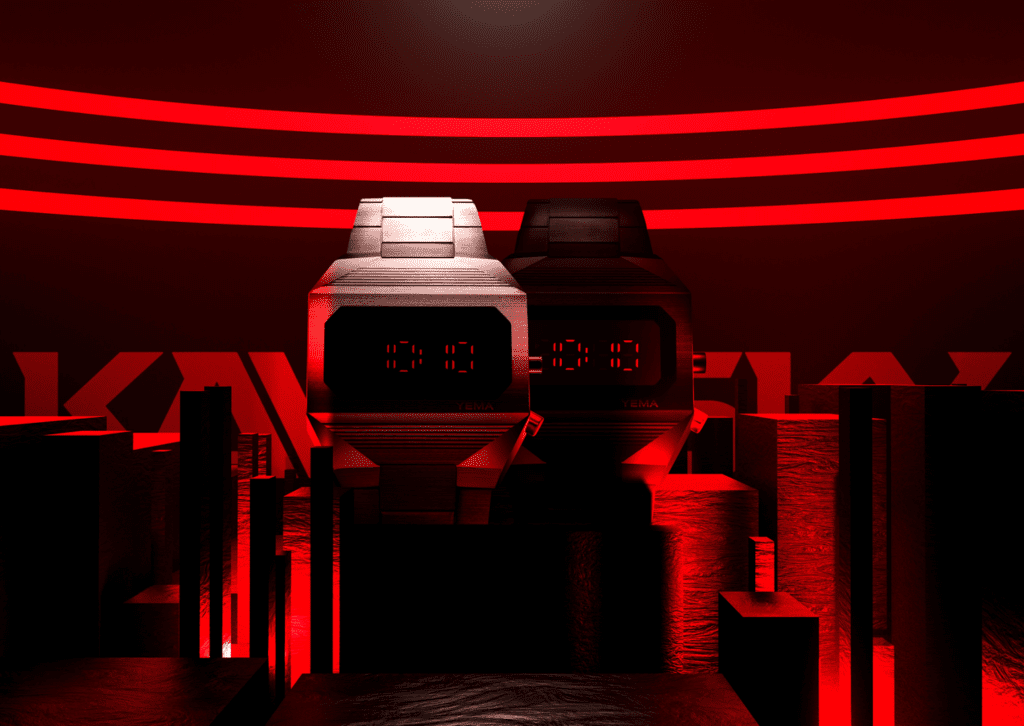 The YEMA LED KAVINSKY, designed by the electro music artist himself in collaboration with French Watchmaker YEMA, becomes one of the artist’s favourite accessories of his character.

Kavinsky is a world famous French electro music artist. His character is fictitiously represented by a Zombie who came back from the dead as a music producer after his Testarossa crash in 1986. His first track “Testarossa Autodrive” was an instant success and 2 additional singles followed right after. In 2007, he was chosen by Daft Punk to open their now legendary “Alive” Tour.

In 2022, KAVINSKY is back with ‘Reborn’, his second album recorded at the famous Motorbass studio in Paris. The first single, ‘Renegade’ features a wide sound and a powerful chorus. With ‘Reborn’ Kavinsky amplifies his sound without deviating from his implacable trajectory.

Made of 316L Stainless steel, the octagonal case of 35.50mm presents a complex geometry with an alternating set of elegant brushed polished finishes, as wished by the artist. The red Led display, always making reference to Kavinsky’s colour codes, contributes to the retro vibe while allowing it to read in style. The LED display remains in standby mode and only lights up when pushing the side button. This push button operation experience that activates the LED Display, is part of the pleasure of owning and using one, adding another layer of charm to the watch.

The second Red KAVINSKY push button allows you to go into the settings of the watch and especially into the 12H display as requested by the artist. In the 1970’s YEMA launched its first LED display watch, which became iconic in France. The YEMA LED KAVINSKY has been reinvented by the artist himself. While using today’s materials, the watch has a very 80’s look which stays faithful to his character and will be offered as a unique limited edition.

Kavinsky will officially launch the preorders of his watch on the 18th March via the Kickstarter funding platform.