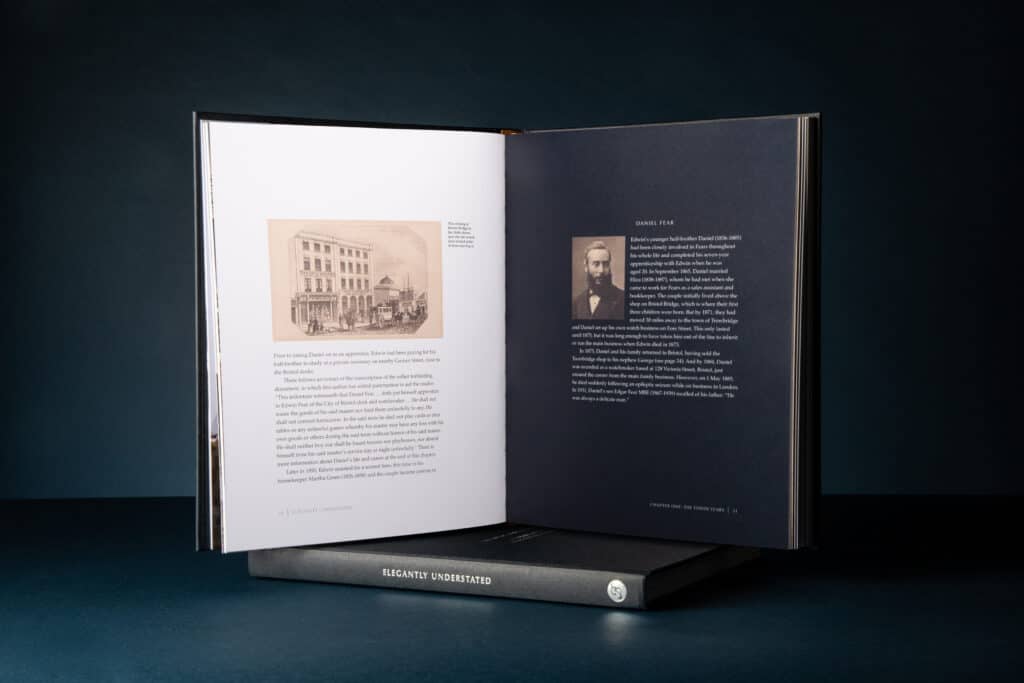 Fears Watch Company are celebrating their 175th Anniversary with the publication of a new book, titled, “Elegantly Understated: 175 years of the Fears Watch Company” which takes a detailed look at one of Britain’s oldest watch companies from its founding in 1846, through to its closure in the late 1970s and its re-birth in 2016.

Researched and written by Bristol-based author Jane Duffus, the book traces Fears’ extensive history across four chapters, each covering the era of one of the Fear family’s managing directors. The book’s foreword has been written by Roger Smith OBE, renowned watchmaker and Chairman of the Alliance of British Watch and Clock Makers.

Printed and hardback bound in the United Kingdom, “Elegantly Understated” includes numerous photographs and illustrations from the Fears archive. Both watches and artefacts are reproduced in full colour along with maps of the former locations and the logos used by the company in each era. The book has been published in the year in which Fears celebrates the 175th anniversary of Edwin Fear founding his workshop on Redcliff Street, Bristol in 1846.

“I am delighted that the history of the company which I’m honoured to run today, has been published in time for such a significant milestone year in Fears’ history. Jane’s enthusiasm for creating this book meant her research left no stone unturned and resulted in her discovering new information that I’d previously not been aware of. To have this all in one place, in a beautifully bound book, filled with interesting anecdotes and numerous pictures is a huge joy for me. I hope that people enjoy reading and learning about Fears’ extensive history as much as I have.”

The author’s research over two years unearthed many new facts about the company, which was thought lost when it closed its doors in the late 1970s. Her numerous interviews included members of the Fear family as well as one of the last watchmakers to work for the company in its first incarnation. This research has resulted in a detailed history not only of one of the oldest watch companies in Britain, but also of a family business that persevered through numerous world catastrophes such as two world wars and the great depression.

“The 175th anniversary of Fears arrives at a pivotal time for British watchmaking. When we founded the Alliance of British Watch and Clock Makers to guide the resurgence of our sector, we immediately recognised the importance of Fears as one of our true heritage makers with a fascinating and genuine continuation of one of Britain’s oldest watchmaking families. It was therefore a privilege to contribute a foreword for this important book and I wish Nicholas and the Fears family my very best for another 175 years – and volume 2!”

“Elegantly Understated” is available to purchase from Fears, Bristol Books, and Amazon for £60. More information can be found at http://www.fearswatches.com/book