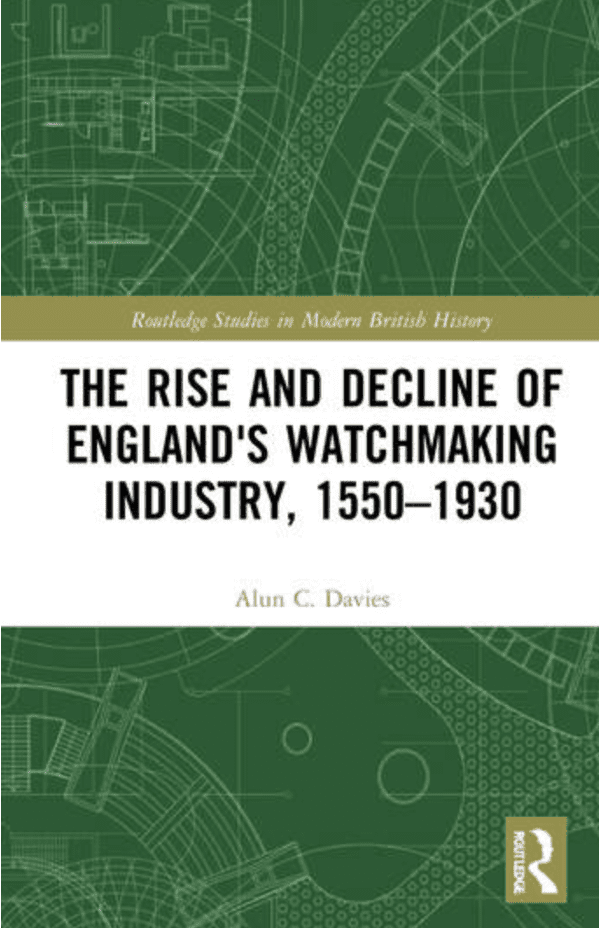 BOOK REVIEW: The Rise and Decline of England’s Watchmaking Industry, 1550–1930

If you want an in-depth analysis and opinion of the extraordinary 380-year history of English Watchmaking, then look no further than the brilliant book, The Rise and Decline of England’s Watchmaking Industry, 1550–1930 by Alun C. Davies.

This weighty tome takes you on an incredible journey from the mid-16th Century to the first quarter of the 20th Century through the workshops of some of the greatest horological geniuses and highly skilled journeymen workers who were the lifeblood of English Watchmaking. But it wasn’t all a ‘bed of roses’ as the author points out, particularly, in the final section of the book, highlighting the major trading issues that the watchmaking industry was beset with.

The book is well thought out and divided into three parts, under the headings, Rise (Part 1), Challenge (Part 2) and Decline (Part 3). We start with the origins of watch and clock making as a craft, then transitioning into an industry and the importance of London, in particular, Clerkenwell, becoming the centre of England’s watch and clockmaking business. It then goes on to explain that although Clerkenwell was of huge significance, other regional hubs, initially in Prescot (North West England) were emerging during the early years. Subsequently, due to the demand for watches, both Liverpool and Coventry rose to prominence in supplying ‘rough’ movements that would be ‘finished’ by the Clerkenwell makers.

We move towards the ‘Golden Age’ of English Horology, which was accelerated with the first major innovation in 1656-57, when Christiaan Huygens applied the pendulum to clocks. This was soon followed by the addition of the balance spring to the pocket watch which also greatly improved the accuracy and reliability of timepieces.

Although the overriding feeling was positive, with a significant increase in demand for domestic clocks and pocket watches, there were major issues on the horizon, which were largely ignored by the industry. There was a ‘consumer revolution’, after the disruptions of the Civil War, Plague and Great Fire of London, the presence of first clocks and then watches became noticeable amongst manufactured goods.

In Part 2 (Challenge), the overseas challenges from Switzerland and to some extent, France, were apparent and triggered internal wrangling between the various Trade organisations and the Government. This manifested itself into large-scale smuggling bringing in ‘Geneva’ watches to London’s shops. Given the size of the objects it was extremely difficult and costly to prevent and police. To add ‘insult to injury’, many of the smuggled timepieces were made to look like ‘English Watches’ carrying the forged names of English makers and places.

This part of the book goes into enormous detail on the issues and implications for the industry and is fairly technical. This is apparent when discussing ‘The 1817 Inquiry’ covering ‘Tariffs and Smuggling’ and ‘The Ingold Episode’, which details the proposal of Pierre-Frédéric Ingold (1787-1878) to set up the National Watch and Chronometer Company, subsequently renamed as the British Watch and Clock Making Company (BWCC). It envisaged a new level of watchmaking technology, beyond that in the workshops of Prescot and Clerkenwell or in Switzerland’s établissage system. Unfortunately, this proposal eventually failed to materialise.

The section concludes on a more positive note, with the development of the chronometer manufacturing sector. Following [John] Harrison’s success with H4 and [Larcum] Kendall’s copies in the 1760s, several watchmaking firms had begun to fulfil the demand from the military and merchant navies.

The final section, (Part 3) focuses on the ‘Decline’ of the industry and begins with the ‘Revolution in America’ which charts the remarkable changes in manufacturing methods developed in the 1860s. This gives a fascinating insight into the exponential growth in annual output and enormous scale of exports which ‘mortally wounded’ the English watchmaking industry. They were still adamant that producing small quantities that were ‘hand-finished’ was the way forward – how wrong they were!

The ‘American Model’ of manufacture, led by Waltham and Elgin, ‘transformed the world’s watch industry’. It was a model of production that was later followed by the Ford Motor Company after visiting the Waltham ’factory’. Over several decades Waltham and others designed and built ‘pneumatically controlled, self-feeding, self-acting, self-gauging, automatic machine tools to produce interchangeable watch parts’. Although, not on such a grand scale, the Swiss also decided to follow this ‘blueprint’ for manufacture, which also added to the sadly ‘inexorable decline’ of English watchmaking in the opinion of the author.

In the last quarter of the 19th Century, there were several attempts to replicate the ‘American System’ in Birmingham, Coventry and Liverpool. Sadly, this was largely unsuccessful – a classic case of ‘too little, too late’!

By the time of First World War, Clerkenwell’s fate was largely sealed, but there was a glimmer of hope, as a number of established firms focused on the production of chronometers for the military, led by the likes of Parkinson & Frodsham, Barraud & Lund, Brockbank, Dent and Charles Frodsham. At this time, only a few leading firms were acquiring rough movements from Prescot, then engaging in the elaborate process of their completion, using their own workshops and the specialist skills of a score of Clerkenwell’s outworkers. In 1858 chronometer manufacturers in England were joined by two new firms, Victor Kullberg and Thomas Mercer which are describe in great detail.

There is a short Postscript which discusses ‘The Third Horological Era’ predominantly detailing the resurgence of the Smith’s Company in the 1930’s as it reinvented itself and built an entirely new business in clocks and watches.

This is a fascinating and detailed overview of the English watchmaking industry which serves as an excellent reference for those that want to understand the issues faced by the trade over this extended period. I would highly recommend this book should you want to know the ‘full story’ of watch and clockmaking over the past 400-years.