A Bright And Bold Statement From MeisterSinger

URWERK End In Style With The UR-105 Tantalum Hull 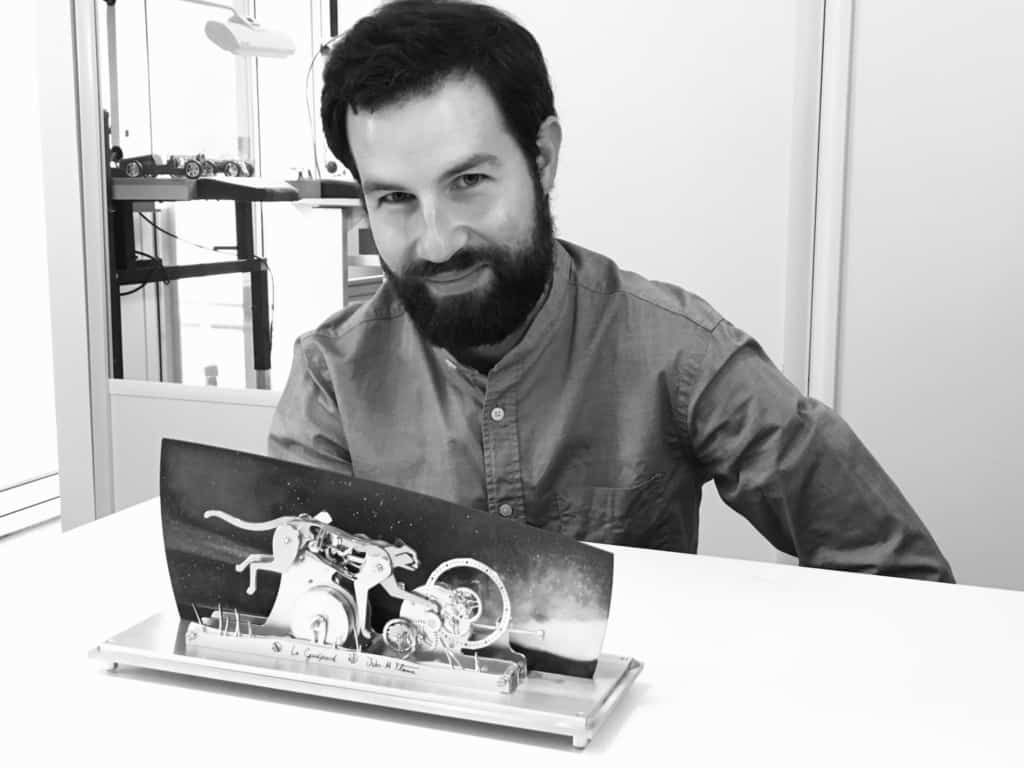 Next we meet John-Mikaël Flaux, Creator & Horologer, who specialises in the art of mechanics, and aims to revisit the world of watchmaking and automatons by giving them a more poetic and extravagant dimension.

In 2012, he was noticed by the Swiss manufacturer Ulysse-Nardin and became a watchmaker in the ‘grande complication’ department. Since then, as an independent watchmaker, he has created some extraordinary timepieces that include cars, insects and his latest creation, Le Guépard – The Cheetah.

We are delighted to share his views on business, the industry and how he is striving to create extraordinary timepieces.

MWM: How did you first get interested in becoming a watchmaker, what was your inspiration and what might you have done had it not been successful?

As a child, I loved taking apart mechanical machines to see what was inside. I was really into Lego Technic, too! When I discovered watchmaking, I immediately fell in love with it and understood that it could make my dream mechanisms come true. Watchmaking is my vocation. I would not have wanted to do anything else, although I maybe could have become a professional drummer.

MWM: What was the most difficult part of getting into the watchmaking industry?

Learning watchmaking was difficult, especially when it came to working with new tools and raw materials. On the other hand, I consider myself lucky: Ulysse Nardin offered me a position just before I graduated. I personally think that the most difficult thing isn’t to get in there, but to stay in once you’ve made it.

I’ve just completed a brand new creation: LE GUEPARD (the Cheetah). Production is limited to 5 copies. Each Cheetah will be unique and personalised according to each client’s taste. I just got an order and am currently manufacturing a new Cheetah. I’m also working on new creations. I still have several projects for automotive and animal automata.

MWM: Tell us something we don’t know about you and your creations?

I’ve never had a creative idea while in my workshop. Day-dreaming is what fuels my creativity. Nothing helps me clear my mind better than going for a walk in the forest right next to my house. To me, creation springs from a dream, not from a list of specifications.

Most of the time, I wear a Pequignet Manuel Royal. I love it because it’s a French watch with a beautiful movement (4 days of power reserve), a very simple design, and I also like to wind it up manually – it has a certain charm. For other occasions, I like to wear my Ulysse-Nardin Classico Dual Time. UN gave it to me as thanks for the creative work I did when I worked for the company, so it reminds me of good things.

I find Frank Jutzi’s clocks so poetic. I would love to own one.

Miki Eleta’s creations (one of my AHCI sponsors) are amazing too.

What I like most is the world of independents. I’ve always been fascinated by independent watchmakers. I immediately wanted to become one of them, and today I feel like I’m on the right track as an AHCI candidate (Academie Horlogère des Créateurs Indépendants).

I’m not too fond of big companies and brands. Too much marketing, and too many shareholders wanting their dividends have diverted them from the age-old values of watchmaking. To my taste, these conditions are made to stifle real creativity.

MWM:  What is next on the horizon for you?

I feel like I opened a door with the Cheetah, and now I’d like to discover what sort of an artist I really am. I have a feeling that there are still so many beautiful things to create.

John-Mikaël Flaux is an independent watchmaker, creator and AHCI candidate based in Besançon (France). He specialises in artistic and horological mechanics, aiming at giving his creations an artistic, poetic and fantastic dimension. His creations include the Wasp, the Car Clock and Time Fury P18 (racing car clocks), the automaton The Duel (a fight between two mechanical fencers) and the Cheetah (his take on a passing strike mechanism with on demand repetition).

In 2012, he was recruited by the Swiss watchmaking company Ulysse-Nardin and started working on grand complication watches. In 2014, he created the Wasp, whose mechanism is based on the insect’s shape. He then became one of the brand’s official designers.

In 2015, he created the Super-Catamaran table clock for Ulysse-Nardin, a unique piece and bona fide “concept clock” inspired by the racing boats ( Basel 2016).

In 2018, he opened his own atelier as an independent watchmaker and creator in France.