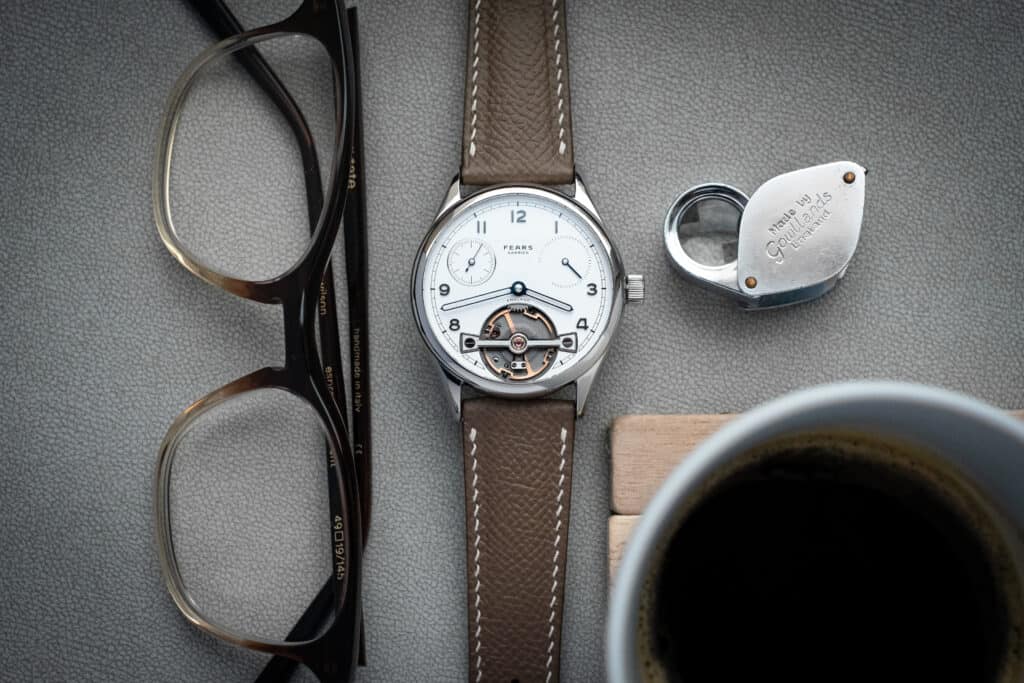 In November 2018, David Brailsford, Co-Founder of Garrick and Nicholas Bowman-Scargill, Managing Director of Fears sat down in a branch of Costa Coffee and discussed working on a joint project.

Keen to ensure the collaboration remained under wraps, they referred to their joint venture as ‘Project Costa’. The two men, first met in October 2016, a few weeks prior to Nicholas relaunching his family company, Fears. They realised that they had much in common. The idea was to harmoniously fuse the design codes of both companies and exploit each firm’s strengths.

It was was intended to unite Garrick’s watchmaking expertise with Fears’ rich heritage and obsessive eye for detail. Some three years later, this has become a reality with the new Fears Garrick, being a stylish symbiotic union.

The watch is presented in a curvaceous 42mm steel case, produced in Garrick’s Norfolk workshop. Painstakingly polished, the case’s sleek profile makes the watch appear smaller than its stated dimensions would suggest.

The dial is dressed in a pure shade of white and marked with tastefully unobtrusive branding. The hours and minutes feature Fears’ signature open-worked hands, in collaboration with applied Arabic numerals, which again are executed in Fears’ ‘Edwin’ style (named after the company’s founder, the typeset is a distillation of historical Fears typefaces, indeed, this font was specially created exclusively for Fears).

The standout aspect is the aperture at the base of the dial which reveals the balance oscillating backwards and forwards. A power-reserve indicator sits at 2 o’clock, while a small seconds display is positioned opposite. A ‘chemin de fer’ – a minute scale on a dial that resembles a railway track – encircles the dial.

The movement, the Garrick UTG04, is hand-wound and finished to an exalted level, which features six screwed chatons, an indication of its refined execution.

“It’s been an absolute pleasure working so closely with one of my best friends and combing our two brands DNA in such a perfect way. Despite everything the past few years has thrown our way we’ve been focused on getting the watch right and I feel it reflects the best of Fears and the best of Garrick.”

The balance wheel, positioned dial side, features a free sprung balance. Unlike the ubiquitous index-regulated balance, the effective length of the hairspring remains constant. The rate of the watch is adjusted by tightening/loosening the timing screws located on the rim of the balance wheel, effectively altering the moment of inertia.

“This project isn’t just about the watch. It’s about our friendship and admiration for each other’s achievements. It just had to happen and it’s a match made in heaven!”

The Fears Garrick is the synergistic outcome of two men discussing horological ideas whilst sharing a pot of tea.