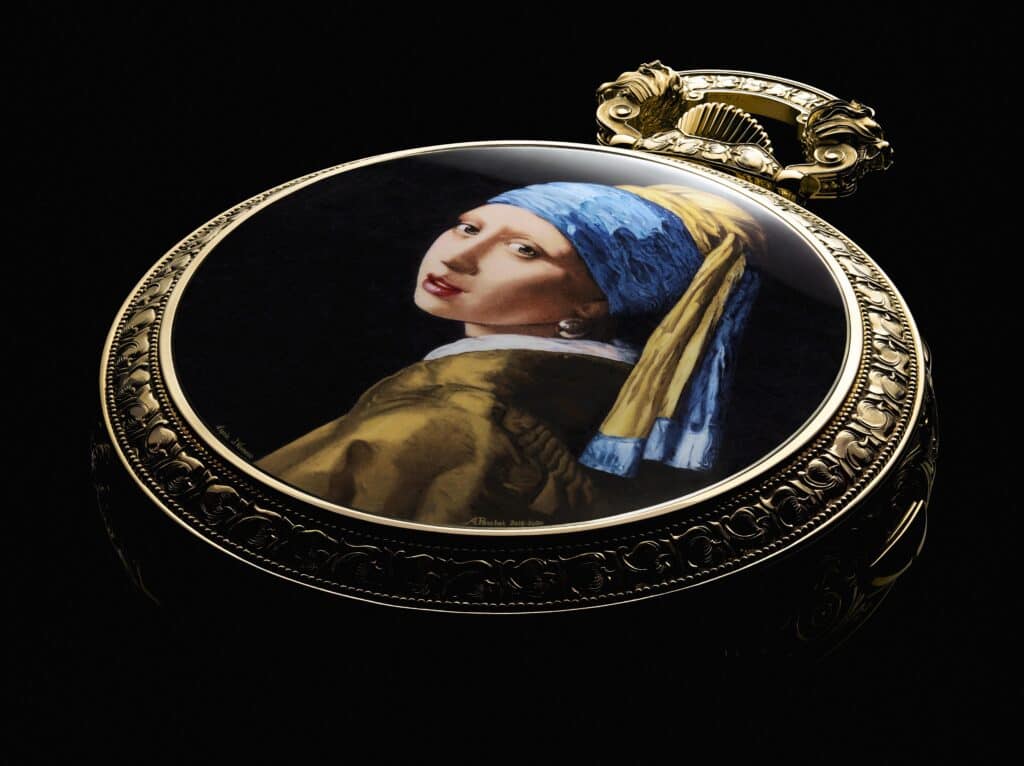 Les Cabinotiers Westminster Sonnerie – Tribute to Johannes Vermeer pocket watch is a bespoke creation combining the watchmaking and artisanal skills of Vacheron Constantin, first undertaken in 2013. It has a new in-house movement, Calibre 3761 with Grande Sonnerie and tourbillon, specially developed by the team of watchmakers who designed the Reference 57260 watch.

Les Cabinotiers is a department in its own right within the Manufacture Vacheron Constantin, dedicated to creating single-piece editions. Following in the footsteps of the Geneva master-watchmakers known as cabinotiers in the Age of Enlightenment, the team took up the challenge of giving substance to the dream of a passionate collector who wanted a pocket watch that was technically and aesthetically exceptional, reflecting the noblest traditions of 18th century Haute Horlogerie.

Stemming from over 266 years of expertise and eight years of development, the Les Cabinotiers Westminster Sonnerie – Tribute to Johannes Vermeer pocket watch embodies art and beauty, exceptional mechanics and technical mastery. This creation fulfils the most secret expectations of a collector for whom “passion consists in always seeking that which is theoretically impossible to obtain”, a collector whose love for single-piece edition led to this project involving eight years of cooperation with Vacheron Constantin. This adventure, brimming with challenges, research and constant exchanges, has given rise to a veritable masterpiece of Haute Horlogerie.

The unique pocket watch is powered by a new 806-part manual winding calibre, regulated by a tourbillon and comprising Grande and Petite Sonnerie Westminster chimes, coupled with a minute repeater.

Within the range of watchmaking complications, Grande Sonnerie models have always enjoyed a special aura, not only because of the inherent complexity of these mechanisms striking several gongs, but also because of the musical qualities required.

Grande Sonnerie watches have a centuries-old tradition within the Maison. Among the oldest timepieces preserved to date, the first travel clock housing such a complication dates back to 1820. When it comes to pocket watches, the oldest model with Grande and Petite Sonnerie in the Vacheron Constantin private collection is dated 1827. It was followed by several timepieces equipped with such mechanisms, some of them representing landmark creations endowed with an array of extremely sophisticated complications, such as the “Packard” presented in 1918 or the King Fouad I watch completed in 1929. More recently, the world’s most complicated pocket watch, Reference 57260, was presented in 2015 on the occasion of the Maison’s 260th anniversary, affirming the expertise of the Maison in the realm of exceptional watchmaking.

“I had long dreamed of having a real Westminster chime pocket watch in my collection with Grande and Petite Sonnerie and adorned with miniature enamel.”

Watch Collector, client of Vacheron Constantin, who commissioned this model

The term ‘Westminster chime’ refers to the world-famous bells of Big Ben, the British Tower of Parliament in London: a four-bar melody consisting of four notes played at different frequencies. In “Grande Sonnerie” mode, the watch chimes the quarters in passing, with the hour repeated at each quarter, meaning three bars of the Westminster melody followed by five single notes for 5.45 am.

Calibre 3761 is equipped with a centripetal strike governor ensuring perfect regularity of the musical sequences, of which the notes must be both distinctly audible and pleasing to the ear. The system is characterised by a pair of weights whose very special shape has been optimised so as to generate a kind of “engine-braking effect” – by centripetal force – on the regulator’s pivot axis, thereby evening-out the energy released by the barrel.

The client expressed the wish that the cover of the officer-type caseback should feature a miniature enamel painting by enameller Anita Porchet. The work chosen was Girl with a Pearl Earring, painted circa 1665 by Dutch artist Johannes Vermeer. Above and beyond the challenge of reproducing the work of a great master, the size of the 98 mm-diameter surface implied additional difficulties. This size of watch, corresponding more to that of historical carriage watches than to a pocket model, requires a degree of dexterity all the more accurate in that the slightest irregularity is glaringly obvious.

The result is reminiscent of the grand miniature enamel painting tradition in which Geneva came to specialise. Acknowledged since the late 16th century for its production of high-quality enamels, Geneva in fact lent its name to several terms referring to the quality of the work of its craftsmen. “Geneva enamels”, a term commonly used since that time, refers to painted enamels covered with a flux known as the “Fondant de Genève”. This technique consists of adding a final transparent and colourless protective coating to the layers of vitrified enamel, thereby giving brilliance and depth to the artist’s work. This invention greatly benefited the timepieces of the period, which were subjected to repeated friction as pocket watches.

The style of the engravings adorning the case was carefully studied by Vacheron Constantin’s engraver in order to blend harmoniously with Vermeer’s painting. After several proposals and discussions with the client, she chose a main ornamental theme composed of acanthus leaves running along scrolls and flowers with a pearl heart. This motif echoes the theme of The Girl with the Pearl Earring with its classical and feminine decoration.

Like an extension of this delicate craftsmanship performed on the case middle, the bow is a work of art in itself with its two roaring lions. At the client’s request, these three-dimensional ronde bosse sculptures are inspired by classical statues. Incredibly realistic, sculpted in a block of gold, they embody a rare degree of mastery.

Stemming from over 266 years of expertise and eight years of development within the Les Cabinotiers department, the Les Cabinotiers Westminster Sonnerie – Tribute to Johannes Vermeer fulfils the expectations of a collector for whom “passion consists in always seeking that which is theoretically impossible to obtain.”