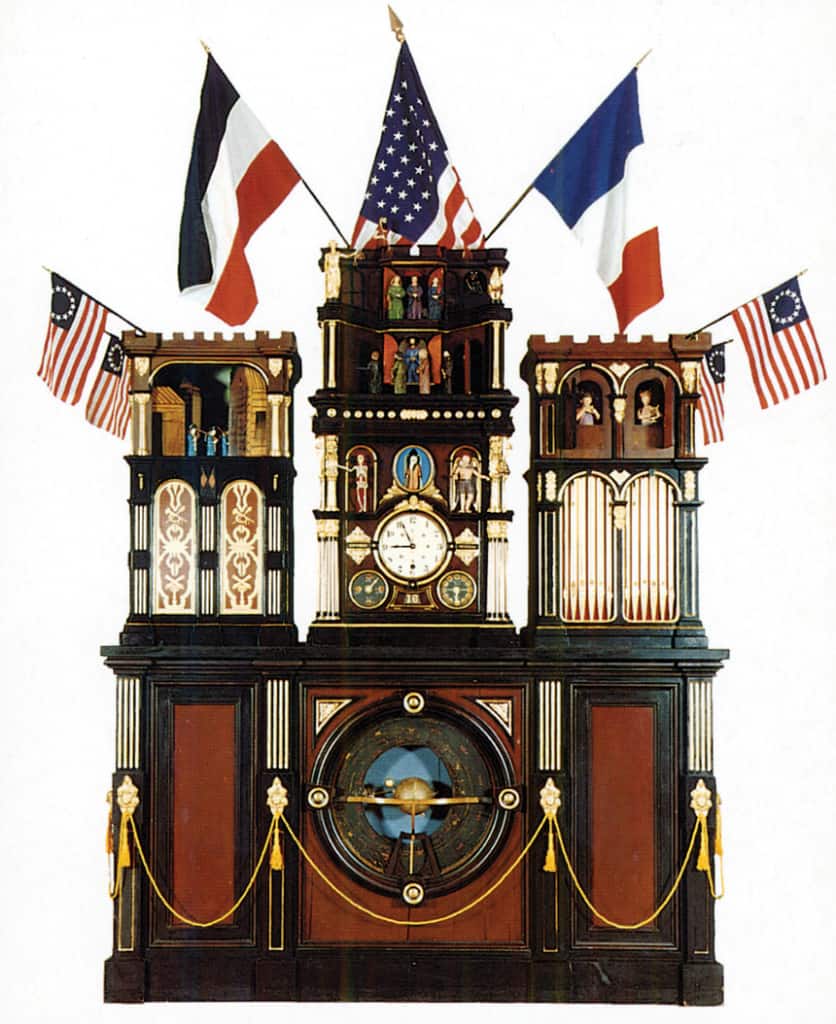 The Engle Clock: The Jewel In The NAWCC Crown

Everything we do at MrWatchMaster revolves around great stories about timepieces through the rich history of horology. We generally, focus on watches, but also have a love of clocks too.

Here we bring you the amazing story of monumental The Engle Clock, which is the crown-jewel of our partner’s collection at the NAWCC and featured in their latest podcast series. They discuss the clock’s fascinating history, and Stephen Engle, the little-known genius who created it.

You will hear from Bill Zell, Museum docent and Engle Clock historian, and Tom Bartels, former Executive Director of the NAWCC, who was responsible for the clock’s acquisition and restoration at the National Watch & Clock Museum.

The Engle clock measures 11′ high, 8′ wide, and 3′ deep. Among its mechanical features are two organ movements, 48 moving figures, and a new type of tellurian (patented by Engle) that illustrates the positions of the moon, constellations, and zodiac relative to the rotating earth. The clock also indicates such things as the months, days of the week, moon phases, and tides. Captain Jacob Reid, the clocks first promoter, was so sure of its technical complexity that he offered $50,000 to anyone who could find a clock that did “more and better work.”

The clock’s eclectic gathering of moving figures include Jesus Christ, the twelve Apostles, the three Marys, Satan, Father Time, the three Ages of Man, Death, Justice, Orpheus, and Linus. A depiction of Continental soldiers marching past Molly Pitcher on their way to the Battle of Monmouth adds a distinctly American dimension to the clock. A figure of Stephen Engle himself (representing ‘Middle Age’) functions as an animated signature of the clock’s maker.

Exactly on the hour the skeletal figure of Death strikes a thigh bone against the skull attached to the column. At 15, 30, and 45-minutes past the hour ‘Father Time’ strikes a bell with a scythe and turns his sandglass while the central figures of Youth, Middle Age, and Old Age revolve in the arch above the clock dial.

At 40-minutes past the hour a parade of Revolutionary soldiers and Molly Pitcher appear in the left tower while a barrel organ plays patriotic tunes. At 55-minutes past the hour the three ‘Marys’ emerge from the central tower and the grand procession of the Apostles takes place accompanied by hymns from the barrel organ in the right tower. The soldier at the very top of the central tower maintains a constant vigil while the clock is running.

To listen to the podcast please see below:

More episodes are available on iTunes and Spotify