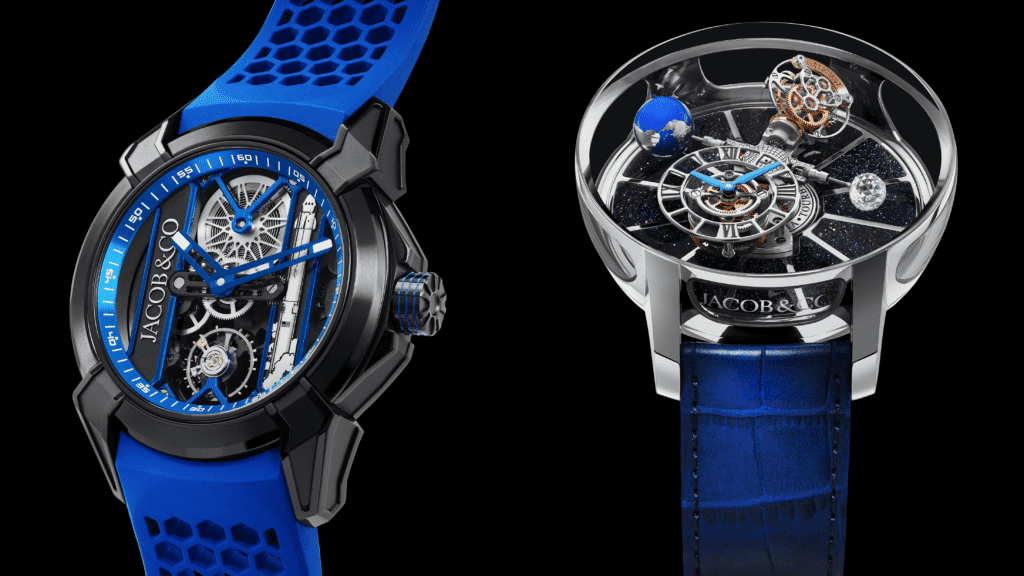 Jacob & Co., Bucherer BLUE, and Sotheby’s have joined forces in the spirit of exploration to send a special timepiece into the unmapped vastness of space before going up for a charitable auction this summer.

Named the Jacob & Co. Astronomia Tourbillon Bucherer BLUE (above), the unique watch, a marvel of Swiss craftsmanship and decorative arts, was the first triple axis tourbillon to leave the Earth’s atmosphere.

The Rakia mission, along with the Astronomia Tourbillon Bucherer BLUE, spent 17 days 1 hour and 37 minutes in space, as the space crew orbited the Earth 273 times at an altitude of 250 miles at nearly 17,500 mph, traveling over 7 million miles in total.

On offer with no reserve (with bidding starting at $1) on the 26th July, the proceeds will be donated to benefit charities, with further details to be announced at a later date. While the Jacob & Co. Astronomia Bucherer BLUE traveled to space and back on a single mission, the timepiece’s impact, because of this special sale, will reverberate for generations.

“Jacob & Co.’s exceptional timepieces, imaginative power, and can-do attitude makes possible what seemed impossible before. Powered by the internationally renowned Sotheby’s, this collaboration brings the Bucherer BLUE philosophy to a whole new level and we are incredibly excited that the Astronomia Bucherer BLUE went up to space, pushing boundaries beyond the expected.”

The complex movement, for one, is a gravitational triple axis tourbillon with the dark blue starry background mirroring the deep, captivating colour of space and the pronounced domed case, made of anti-reflective sapphire crystal, essentially features a microcosm: four satellites turn in constant motion, including the dial, tourbillon cage, a spherical diamond that reflects the moon, and a magnesium lacquered globe that reflects the Earth.

According to crew member, Eytan Stibbe (investor and philanthropist), the Astronomia Tourbillon Bucherer BLUE timepiece continued to accurately display the time during the launch and return to earth, enduring extremely high G-forces and also micro-gravity while in space.

“The Astronomia tourbillon is a truly unique, groundbreaking timepiece that elevates the art of watchmaking above the Earth, above time. So the very idea of sending this special Astronomia into space, as you can imagine, was very exciting. It’s only fitting that the Astronomia Bucherer BLUE ends up revolving around the Earth. The watch had the same viewpoint on us as we usually have on it. This reversal is typical of the way I envision the creation of timepieces.”

Along with the Astronomia tourbillon, Jacob & Co. and Bucherer are also honoring the greater involvement of the private sector in space exploration with the release of the EpicX Bucherer BLUE Edition, a skeleton watch that also nods to interstellar travel.

The limited-edition manual timepiece, which was inspired by the mission, will be available for purchase exclusively in the U.S. at Bucherer. The exclusive 18 pieces feature an eye-catching blue honeycomb strap and a titanium caseback with an engraving of an astronaut, clad in a spacesuit and helmet, gazing at the Earth from space.