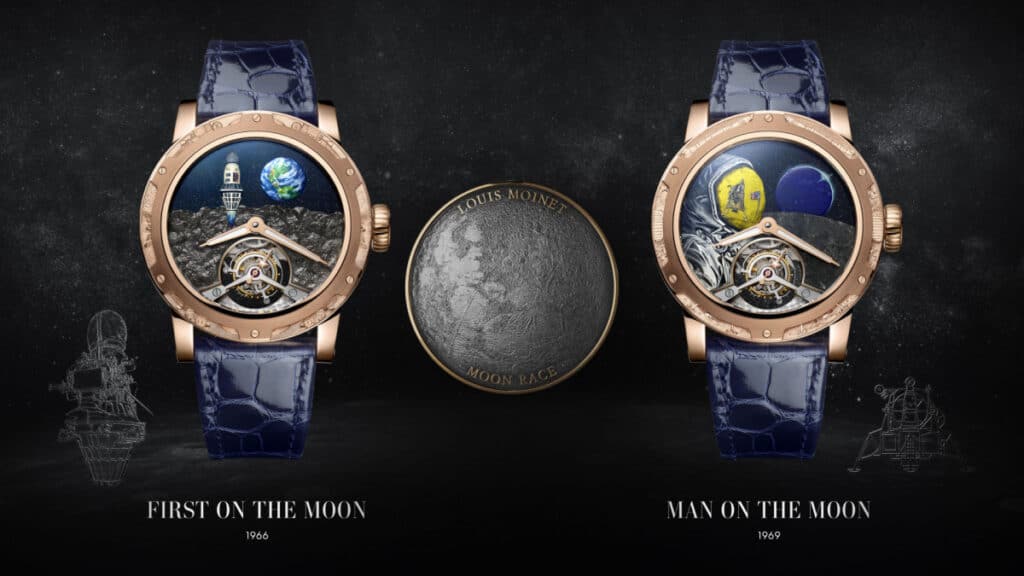 Louis Moinet’s ‘Moon Race’ series reflects what is perhaps the most exciting epic of modern times. This ‘space race’ is staged through four key episodes in the conquest of the Moon.

It combines the finest craftsmanship with lunar meteorite and the most spectacular natural stones. These four creations all feature an authentic fragment of the spacecraft that shaped history. Each of them has travelled more than a million kilometres in interplanetary space before being presented in the Louis Moinet travel trunk, which invites you on a journey through space.

The dial depicts the soft landing of Luna 9. The spacecraft is hand-engraved and then entirely painted. It includes an original piece of woven fibre from Luna 24. This piece made the journey from the Earth to the Moon and back – over a million kilometres through interplanetary space – aboard Luna 24. The Moon is entirely hand-engraved, then blackened in the old-fashioned way to give it an enigmatic appearance.

The sky is made of black astralite, also known as aventurine glass. This material has been preserved for more than 50 years to be used for a major artistic work. The countless sparkles of its particles resemble gold spangles, stars shining against the pure backdrop of the sky. The Earth is depicted in a highly detailed artistic miniature painting, standing out against the sky thanks to the volume of its applique.

‘Man on the Moon’ represents the modern-day Christopher Columbus, the first man to walk on the Moon! His astronaut’s suit is hand-engraved and coloured using a miniature painting technique. His visor is an authentic fragment of the polyimide film that protected his spacecraft across a wide temperature range (-250°C to 400°C). This material was used to travel from the Earth to the Moon and back – more than a million kilometres in interplanetary space – on Apollo 11.

The miniature painting on this visor represents the reflection of the lunar module. In order to achieve the finest details, the painter trims the hairs of their brush one by one, using only the last one to create the finest decorations. The Moon is represented by a real lunar meteorite, named Dar Al Gani 400.  This lunar anorthosite is a rock found on Earth in 1998 and ejected from the Moon following the impact of a celestial object.

The curved Earth is embodied by that ‘azure stone’ used for 7,000 years by the greatest civilisations: lapis lazuli. It floats in a sky of exceptional quality crafted from black aventurine.

‘Around the Moon’ depicts the spectacular rescue of Apollo 13, which managed to reach Earth with a badly damaged spacecraft.  The spacecraft is hand-engraved and then enhanced with a fragment of the polyimide film that protected it on its return journey, particularly during its atmospheric re-entry.  This material travelled from the Earth to the orbit of the Moon and then back to Earth. In total, it travelled more than a million kilometres through interplanetary space aboard Apollo 13.

The spacecraft can be seen heading towards Earth, having circled the Moon. Onyx, a variety of agate used since antiquity for its deep black colour, embodies the mysterious face of the night star. It is set against granite from the Bernese Oberland, found by Daniel Haas at an altitude of over 2,000 metres. The blue Pietersite from Namibia was chosen to evoke the beauty of the Earth. Its shimmering effect is due to the many multicoloured fibre inclusions that give it bluish tones with an incomparable silky appearance.

Black astralite completes the picture. This material has a history, since its origins date back to Murano at the beginning of the 17th century. It is the result of a lucky mistake – when a glassmaker dropped copper filings into molten glass that was slowly cooled – and its name comes from the Italian word “all’avventura”. That is why astralite is also known as aventurine, or even river gold.

The astralite adorning the Moon Race watch was acquired and carefully preserved by the father of Daniel Haas, our partner in the field of exceptional stones. The Haas family has been a pioneer in the sourcing and cutting of natural stone dials for two generations.

‘Last on the Moon’ is the final episode of the “Moon Race”. One of the results of Luna 24 was the proof of the existence of water on the Moon. Luna 24 is depicted on its journey back to Earth. Its prodigious design is hand-engraved, and a real piece of Luna 24 (resin-coated braided fibre) adorns its side. This material has travelled over a million kilometres through interplanetary space from the Earth to the Moon and back, aboard Luna 24.

The Moon is shown here in high contrast, with copper etching to highlight its craters. Another of Nature’s mysteries, azurite has been transformed into malachite by a phenomenon known as pseudomorphosis. This metamorphosis allows it to retain part of its appearance while morphing into malachite. The result is a very special mineral: azurite-malachite, which perfectly embodies the Earth.

It is complemented by a yellow Pietersite sun, which fully deserves its nickname of “storm stone”. It lights up the sky with black aventurine of exceptional quality.