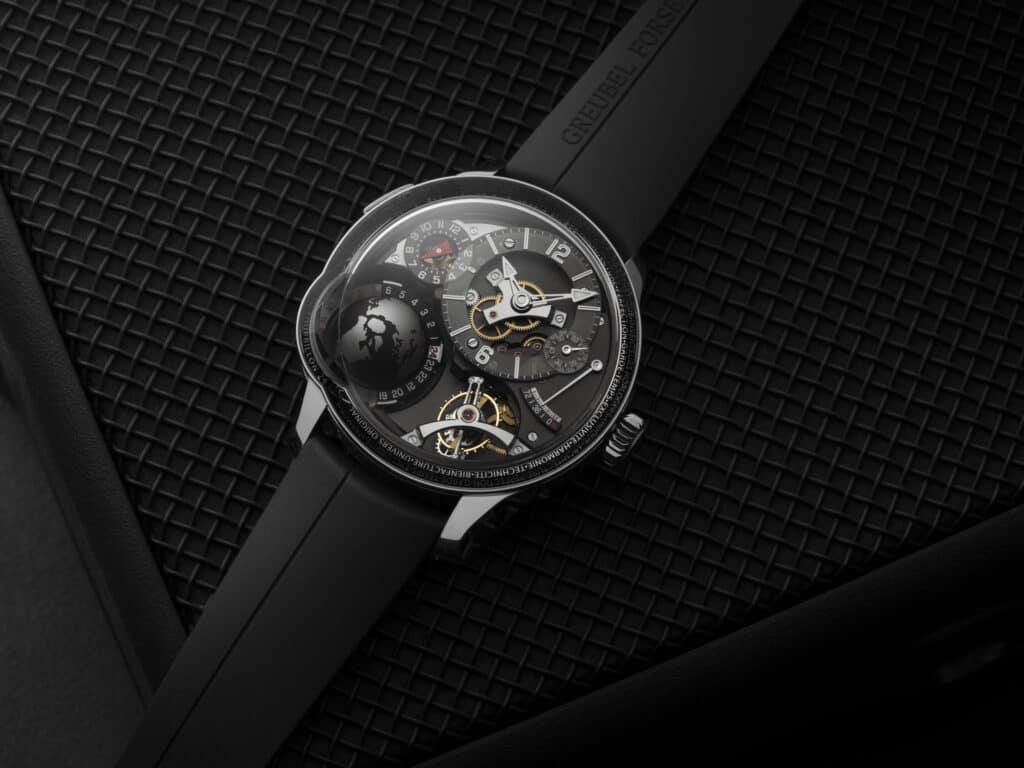 Greubel Forsey keeps moving forward with the Atelier unveiling the third terrestrial interpretation of its GMT Earth. This unique and now even more modern creation features a new titanium case and is adorned with an even more elegant intense black finish: limited edition of 11 pieces.

With the GMT Earth, Greubel Forsey has created a watch that, for the first time, makes it possible to appreciate the entirety of the world in a single glance – this technical feat first appeared in 2011. At the time of the first ‘GMT’, the Earth was not yet fully revealed. Seven years later, the design of the Earth was finally complete: visible from all angles in its new sapphire alcove, it appears as though it is floating in space.

The first version of the GMT Earth was in white gold. The second, in platinum. Today, this timepiece is available with a new titanium case.

The GMT Earth in titanium will be available in a limited edition of 11 pieces, three times less than the original version. Weighing just 117 g, the weight of the strap has been reduced by two-thirds. The case has lost just over a third of its weight. Titanium is used not only for the entire case, but also the bridges, the GMT push-piece, the crown and the folding buckle, the latter two being the components most exposed to shocks and scratches. To accompany the light and matt tones of titanium, Greubel Forsey opted for a black finish on the dial.

The GMT Earth displays four key pieces of information on its dial side. The first is the off-centre hours, minutes and seconds display. The first two feature large openworked hands finished with a Super-LumiNova tip, complemented by a small seconds hand on a sapphire disc at three o’clock.

On the left is the GMT indicator, whose red hand effortlessly stands out against a hand-engraved black gold disc filled with lacquer. The third, located opposite the crown, is the power reserve, designed following the same process: a black, engraved gold segment, filled with lacquer and covered by a silver-polished steel hand.

Finally between 7 o’clock and 9 o’clock, the Earth occupies the largest space, completing a full rotation in 24 hours. The engraved sapphire ring around the equator acts as a day / night indication and allows you to instantly see which hemisphere is in the daytime and which is at night.

The GMT Earth boasts Greubel Forsey’s third invention. The Tourbillon 24 Secondes uses a fast rotation speed and is set at an angle to resolve the positioning problem in relation to gravity and which is crucial for the operation of the oscillator.

Limited edition of 11 pieces in titanium

• 72-hours power reserve on a sector

• In titanium, with titanium plates, engraved,

hand-finished with text, screwed to the caseband

on a hand-punched background

Water resistance of the case

and lacquered minutes and small seconds

• Power-reserve and GMT indicators in gold,

in synthetic sapphire, engraved and lacquered

• South Pole of the globe with UTC indicator,