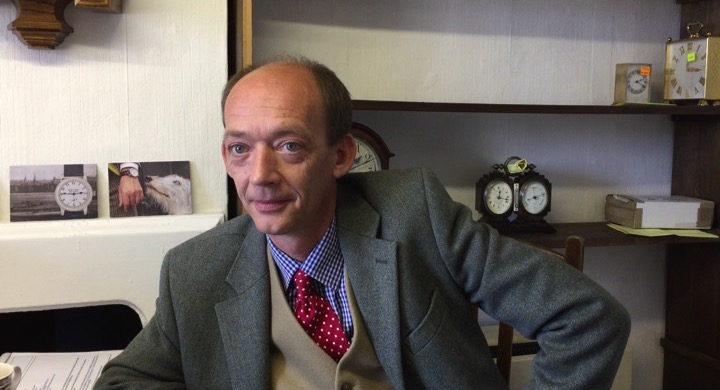 We spent a wonderful day in the company of Robert Loomes, a passionate English Watchmaker based in the beautiful town of Stamford in Lincolnshire. The firm of Loomes is a relatively recent creation, although the people behind it have a long and fiercely proud reputation for bringing out the best of British horology.

Robert’s father, Brian Loomes HonFBHI is a clock dealer based in the Yorkshire Dales. He is also the author of over twenty five books on the history of British clock and watchmaking and their makers.

Robert grew up immersed in the family business and, almost inevitably, ended up working in the business. Brian allowed Robert to spend his days off in the workshops of some of the best, and kindest, restorers in the north of England. At the age of twenty four Robert started his own restoration business in the Lincolnshire market town of Stamford.

Stamford was chosen as a convenient half way point between London and York but its charm as a mediaeval walled town has held Robert and his partner Robina for almost twenty five years. Their historic workshop dates back to before the 1580s. It was first the town gaol and later the gaoler’s house.

Robert finally qualified as a Member of the British Horological Institute in 2000. By that point the business had expanded to half a dozen staff and already had an international reputation for fine clock and watch restoration. He spent six years as a volunteer director at the British Horological Institute, ending up as director for Education in his final years then, working with Mark Mills FBHI, from SeikoUK. He is currently the vice-chairman of the BHI, largely a public speaking role.

Meanwhile, having made a couple of wristwatches out of imported Swiss bits for fun, Loomes decided to make a batch of cheap automatic watches. The first hundred sold in a matter of weeks and it was clear the business was changing direction.

The new workshops were acquired in 2009. Shortly afterwards Robina took over as Managing Director. With a history of managing rapid growth she was adept at expanding the business, recruiting only the best and expanding the team up to fifteen members of staff.

Robina expressed the now much quoted notion that if the 20th century had been about globalisation then the 21st was to be about localisation. Robert was under instruction to develop an all-British-made watch.

This was quickly developed around a stock of old Smiths movements. The staff set to on dialmaking, hand production, case finishing, and later interesting skills like enameling. We are the only English firm who can hand fire glass enamel dials in our workshops – made in exactly the same way as dials were made 250 years ago. This work went on to produce the Robin range of watches, still selling well today.

Meanwhile, Robert hired in special expertise to build the Loomes milling machine. It took two years to build but, when completed in August 2013, it is able to machine almost all the components needed for movement manufacture. The mainplate, cocks and bridges are all machined on it.

With assistance from a wild array of the very best in Britain, Loomes went on to run a number of research projects from 2011 to date. The Institute of Advanced Manufacturing, the Copper Alliance, the Welding Institute, and the National Physical Laboratory (who are responsible for maintaining UK measuring standards, including time) and a host of University engineering departments all contributed. Robert frequently won EU funding for his work, described by one panel at the IAM as “world class engineering”. His unique single piece balance was written up in the Horological Journal.

His comprehension of not just horology but also of metallurgy, knowing how alloys are created, has been invaluable. Said Robert “my mother used to work in the Sheffield stainless steel industry – she taught me most of the basics about metalmaking. From there we moved on to work with leading specialists in ferrous and non-ferrous metals to find the most appropriate choice of material for each component.”

Loomes set out to find the right machine shops across Middle England, where enthusiastic owner-managers could be persuaded to make unusual components. We were amused when other watchmaking companies said it was impossible to do this in Britain “we don’t have the skills or the machines” one watch journal wrote in only 2012. Robert found that, on the contrary, people were falling over themselves to get involved in British watchmaking.

The firm who produce both our balance wheels and some barrel components is run by a Steve, who was apprenticed to Rotherhams in the 1960s. All the people who taught him as a young man had worked in Rotherhams’ watch manufacturing business in Coventry. Steve has taught his own staff the same skills. He is typical of the kind of people who have helped with manufacturing turned parts for them.

Finally, all the components are slotting into place and Loomes are about to unveil their own movement, producing a watch where every single component, even jewels, screws and springs, is made in England. It is, they believe, the only entirely English-manufactured watch.

When not playing with watches, Robert and Robina enjoy spending as much time as possible outdoors. Robina rides horses and Robert is well known for using his Thames river skiff – a larger rowing boat designed to carry passengers. Moored outside the shop and called “the escapement”, it is used to escape the office and gently drift down the river and out into open countryside.

Robert is also a Friend of MrWatchMaster.